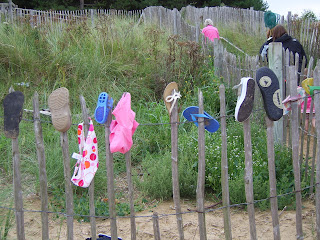 Jamie is now 12 and a half months old and still not walking. This wouldn't be worth commenting on if it wasn't for the fact that he promised so much, so early. Almost two months ago he seemed on the verge of breaking into a trot. He managed two or three steps at a time unsupported, and one memorable morning about a month ago he walked about two metres to me, taking about ten steps in the process. I say it was memorable, but such has been his reluctance to walk since then that I'm starting to wonder if I imagined it.
People say you should rearrange the furniture in such a way that babies are forced to go outside of their comfort zone to get to them. One of the problems with that, for a champion crawler like Jamie, is that there is always an easier four-limbed option. Maybe there is some way of callibrating the optimum distance that will make the idea of two-legged travel more desirable than a crawl.
I guess I should be careful what I wish for. We're already having to move more and more stuff out of harm's way. Yesterday he pulled over my electric guitar and the shelves in the bathroom - sorry I didn't tell you Charlotte. It's a good job you're such an avid reader of HH!


walking a more desirable
Posted by Hackney_bloke at Friday, October 31, 2008 No comments:

Today was another of the NCT babies' birthday parties. C was the latest to reach the ripe old age of one and I attended her bash representing the Derrick-Goddard contingent. Apart from C's dad, I was the only other man there. This will be the way of things from now on I think. I have entered a predominantly female environment, and one, which I am somewhat ashamed to say, I have not fully paid tribute to in the past.
Since taking over more of the childcare duties I have become humbled by the recognition of the work that Charlotte did before me. It's exhausting in a different way to work. I'm with Jamie all day, which is great, but it really is all encompassing. Unless he's asleep or tied into his high chair (not really tied, but harnessed...) you are really limited in what you can do. Charlotte nods sagely when I pronounce this revelation, like she didn't tell me a hundred times. It's another of those pieces of wisdom about 'having children' that sort of goes in one ear and out the other until you are struck by the reality of it. For example, everybody tells you that you won't get much sleep, and you think, "A bit less sleep. So what!" But it's not like having a few too many on a school night and having to soldier on the next day at work. When you have kids, that sleep is never coming back. There is no lie in at the end of the rainbow.
Anyway, back at the party, when I wasn't bonding with my newfound sisters, I was eating almost as much party food as Jamie. He has been insatiable today, and was thrilled to be offered pitta, fish balls, cake and jelly in quantity. Amazingly he is still having dinner this evening, despite a mammoth lunch today as well. I was running out of things to feed him.
C's parents' present to themselves is a night out, which I wish Charlotte and I could have done for Jamie's. I am slightly envious of their curry, even though they could be falling asleep in their starters after organising and running today's events. As always, the host has to appear as unflustered as possible and look like nothing was any trouble at all, when the reality is slightly different as we all know. I think I'd rather got to a party than hold one - even a children's one. Especially a children's one! C's gran said it gets even worse when they are old enough to need proper entertaining. At her son's fourth party she tells how her carefully planned games, activities and diversions were exhausted in about 20 minutes leaving an afternoon of unplanned mayhem ahead.
At least these days we have Cbeebies I suppose.
Posted by Hackney_bloke at Thursday, October 30, 2008 2 comments: 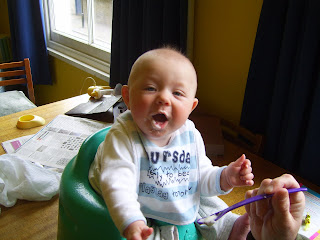 It's strange, and quite amazing to think that Jamie ate nothing for the first six months of his life. He subsisted entirely on milk. Since then he has revealed quite an appetite, which isn't surprising really after such a prolonged liquid diet. Starting with rather bland baby rice, he quickly began to wolf stuff down, despite the supposed tiny size of his stomach. While other babies were quite picky about what they ate, he seemed to devour everything, and in quantity. Early favourites were lovely lentils (from the sainted Annabel Karmel's baby recipe book), rice and peas, and banana mush. Now as he moves on to more challenging foods, it's not quite as easy, and some of the old favourites - notably the lentils - seem to have gone by the wayside.
I can't say I blame him on red lentils, which for me always conjure up a foul muck called lentil soup that was very popular when I was growing up - although not with me. Jamie's response to something which is not to his taste is to allow it mouthspace before squidging it out and down his chin. We still make the majority of his food, and the sight of some lovingly created dish being received this way has driven me to despair. I suppose though it's just a case of working with him. We have very little to complain about compared with some children who seem to eat next to nothing.
At nursery he is being exposed to lots of new flavours. Menus are culturally appropriate to the children who attend. As this is multicultural Hackney, that means lots of new flavours, including plantain on his first day - I think that got the squidge treatment. Yesterday it was fish fingers and beans, which he loved apparently. So much for our tutoring of his taste buds with organic, seasonal produce, and avoidance of processed foods. That will be his Scottish roots showing through I guess - deep fried, salty and sugary? Bring it on.
Actually, that's a little unfair on the nursery, which cooks all the food on site and does seem to work hard at getting the children to eat, which with his nibs at the moment is sometimes not easy.
And yet! Yesterday's report of his eating was that he was insatiable, so I was surprised when he got home he polished off an apple, a peach, a plate of pasta and a sandwich. He would probably have still been eating if we hadn't insisted on bath. As it was, he seemed to gaze down on his round little tum with some pride in the bath.
Posted by Hackney_bloke at Tuesday, October 28, 2008 No comments:

I didn't think that I would have a problem putting our son into nursery - unlike my wife, who was fairly guilt ridden at having to do it. However I am now the one who drops him off every day, and there is a moment when I hand him over to his keyworker Pauline when he turns back to me with arms outstretched. You would need a heart of stone not to feel bad. The flip side is that I get to pick him up and earn myself a big cry of "Dadda" as he scuttles across the nursery floor to climb up on me. At least he does at the minute. There may come a time when the attractions of the nursery are more compelling than those of dadda, and he doesn't scuttle across, and perhaps even leans towards Pauline at home time.
Will it be today? I'll find out at about 4.30pm.
Posted by Hackney_bloke at Monday, October 27, 2008 No comments: 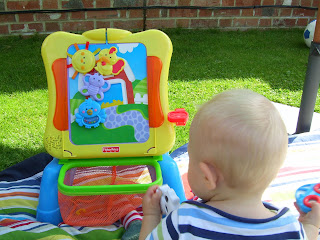 Well, I never did make good on that last post. It's amazing how quickly a year goes when you're a parent. Our little boy turned one about a week ago, and my wife had to go back to work. He's now in nursery three days a week and I'm looking after him for the other two - Mr Mum so to speak. He's there at the moment. My days are Wednesday and Thursday.
This step back from what passes as my career ladder coincides with a period of some financial turbulence, in case you hadn't noticed. However the good thing about working for yourself is that it is unlikely that you will lose your job. There is no job to lose - you just get less work. At the moment, it doesn't seem to be a time for climbing the greasy pole, so I am looking forward to spending more quality time with J and riding out the economic storm in a haze of soft toys, nursery rhymes and Cbeebies.
This week we went to singing with lots of other babies. This is a regular gig for J, but I've only been once before. He actually seemed like one of the big kids as there were lots of babies there, which again made me think how much he has developed in such a short period of time. It's one of the reasons I'm doing this. I doubt I'll ever get the chance again.
Having said that - and apologies to my wife - it is really tiring being with a little one all day. Oh well, I've made my bed now.
Posted by Hackney_bloke at Friday, October 24, 2008 No comments: