The bairn is having a lie down and is now one and a half hours into an afternoon kip. Which is great, apart from the fact that he is sleeping through the remaining daylight and I still haven't been out of the house today. Unless he gets up in about the next five to 10 minutes, it's unlikely I will get outside today. Wake up!!!
Posted by Hackney_bloke at Thursday, January 08, 2009 No comments:

Can we have that again? 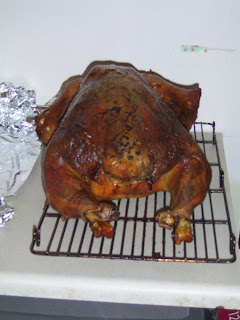 I feel robbed of the festive experience. Everything started really well with some lovely days at the in-laws and Christmas dinner produced by the sis-in-law. It was all looking good for a week of excess and laziness when Jamie came down with something on the day after Boxing Day. It seems to have been some sort of virus and manifest itself with lots of vomiting and increasing listlessness.
He is normally really robust and active, so it was quite disturbing to see him so low. All he wanted to do was sit on his mum's knee - funny how she's the first port of call in troubled times. He didn't eat much and wasn't drinking a lot either, so we were quite worried about dehydration. We took him to an out of hours service where the paediatrician squeezed his fingers, poked and prodded him, before pronouncing he would get over it himself. There wasn't really much else we could do, but it was reassuring to hear he was going ot be okay. At the time it seemed as if he would never get better. I dread to think what's it's like dealing with long term illness in a child.
As luck would have it, he started doing an Uncle Albert and came across as the picture of health as soon as he encountered a doctor, painting us as a couple of paranoid time wasters. Cheers Jamie.
The next day, he was on his way to being more like his old self, but has not gone to nursery today to give him a chance to get back his old strength. Having spent to past week rinsing sick out of clothes, bedding and carpets, I am glad to have him back.
Posted by Hackney_bloke at Monday, January 05, 2009 No comments: