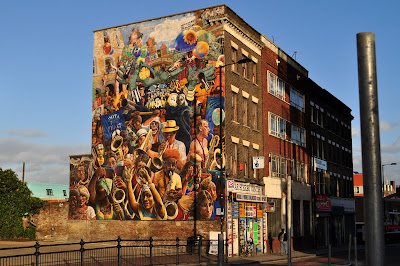 Worrying news that the Dalston Peace Mural is considered to be threatened by Hackney Council's leasing of the building it adorns to a private developer.

This might not be cause for concern, were it not for what some see as the Council's past rather laissez faire attitude to development in Dalston. The tale of the Dalston Four Aces theatre, which was across the road from the mural will live long in local memories, as will the fates of Tony's Cafe and Spirit's grocery in Broadway Market. Some see it as another example of high-handed disregard for local heritage, while others see the new development as inevitable on a slightly moribund site.

What is clear is that the mural has long provided a splash of colour in one of Dalston's least inspiring areas. Many passengers waiting for the 38, 30 or 277 bus will have cast a glance at it. The mural was designed by community artist Ray Walker and painted in 1985 by his wife Anna Walker and colleague Mick Jones after his death in 1984. More recently it has featured on the cover of the Home album by Hackney band Rudimental.

Plans for the the building and its neighbours include the inevitable bar and restaurant to service the upwardly mobile community attracted by the trendy new flats that dot the area. Despite the ire of some in the community, this may be the saving of the mural, which is the kind of feature that any developer would be mad not to make the most of. Better lighting, seating, and an information board would easily add to the its utility.

It would be a shame to lose the mural, and I'm sure that won't happen, but the buildings on that stretch are well overdue some TLC. I can remember waiting for a bus there a few years back and a window pane fell out of the flats. It was a wonder nobody was killed, but being Hackney hardly anybody blinked after a momentary 'Tsk!' skywards.
Posted by Hackney_bloke at Wednesday, July 24, 2013 No comments: