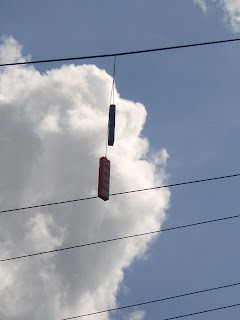 A couple of years ago there was a strange phenomenon of objects being left on the top of East London bus stops. Space Potatoes, as nobody but me called them were small objects d'art made from spuds wrapped in foil, cotton buds and wooden skewers. They seemed t have no discernible purpose other than to intrigue, and as far as I know, nobody was ever sure who produced them.

Now these objects seem to have street art successors, on a road near me at least. The new mystery objects are coloured blocks of wood with words such as 'POWER' 'TAX' and 'MONEY' printed on them. They are connected together with string and slung over telegraph wires. So far I have spotted a small clutch of them at the top of Eleanor Road, E8. What does it all mean? 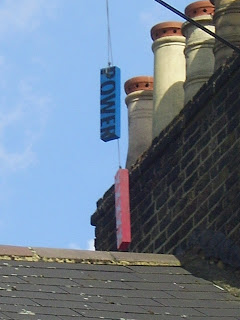 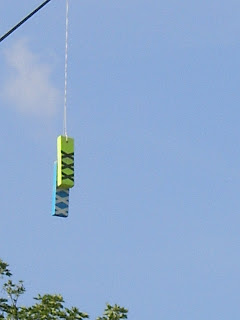 Yesterday I had J for the day while his mum took the little one off to meet her work colleagues. It was a nice reminder of what it was like when I looked after him more often, and also an indicator of how much he has progressed.

We didn't really do anything that different to our old routine - London Fields playground, Museum of Childhood, Hackney Library - but at two and three quarters, he is so much more independent than he ever used to be. I have always been in the habit of asking him if he wants to do whatever it is I think we should do. Now, more often than not, the answer is, "No! I don't want to do that!" unless I have presented him with an illusion of choice to direct his response (even then, there's every chance he'll see through my flimsy plan.)

Before we left the Museum, he was playing on his scooter on the area outside. I took the opportunity for a sit down while he whizzed about - he is very adept on it - and after going up and down the slope a few times, he settled into a conversation with one of the staff.  I couldn't actually hear what was being said, but by the looks of his hand gestures and facial expressions, he was holding up his end of the conversation. I had this sudden pang of regret, recognising that he no longer needs me for everything and is on the way to developing his own life.

(Actually, after a while I did sidle up to the lady and muscle in on the conversation in the manner of Billy No Mates at a party. They were talking about the seaside as it happens and he was describing how the tide was in on a recent trip to the seaside, resulting in no beach. However when the tide turned, the beach was very big - well observed!)

An area where I'm quite thankful he needs me less is in the toilet department. As he's now potty trained (apart from a few night time accidents) I don't have to lug around the changing kit of old - nappies, wipes, mat, spare clothes, etc. My duties are now relegated to holding the potty for him, agreeing that, yes, it is a big wee, and helping out when he has to use big toilets. While doing this at the Museum, I had the misfortune of seeing my sunglasses fall into the toilet bowl as I positioned him. What's a dad to do? Well, they were £16 from Boots, so what do you think I did?

I'll need to remember not to nibble on the arms from now on.
Posted by Hackney_bloke at Wednesday, June 30, 2010 No comments:

I could put it off no longer. More than two months after number two son's arrival I called in the estate agents this week. I really have been putting it off, partly due to a dislike of shiny-suited spivvery in all its forms, and also through reticence at the prospect of kicking off the process.

This week I've seen three estate agents, and although they are all... well, estate agents, they weren't as bad as the ones I remember from the last time. Especially the one who sold me my current gaff, who was a slimey creep. This lot were almost human. I admit that it's hard to feel a sense of loathing to someone who tells you your flat is worth more than four times what you paid for it - you want to kiss them actually.

Of course it's all paper money, and no sooner had I got used to my notional new wealth than it seemed to be slipping away. There's an issue with the lease - it's too short - so I have to go cap in hand to the bloke who owns the freehold and negotiate an extension. I say negotiate - it feels like he's got me over a barrel, so it may be a bit of a one sided conversation. Basically I'm going to get stiffed.

There are also issues with the various elements of the flat that I feel give it its character, but that others may think are a sign that it's about to collapse. I had a builder round today to give me a quote on some plastering and he started raising the possibility of subsidence. Gloom!

Luckily, this is where I'm hoping my new found friends the slimey east eight estate agents will come into their own. If they really think this place is worth what they say it is, then I don't doubt they can shift it. The number of tight-trousered trustafarians walking around these days gives me hope that I'm in the right place at the right time. Where we'll be in six months time, I couldn't say.
Posted by Hackney_bloke at Thursday, June 10, 2010 No comments:

The last time the World Cup rolled round I was child free. Come to think of it, I wasn't married either - truly young, free and single (well two out or three, maybe). This time I have two kids and a lovely wife to consider before the quadrennial soccer fest kicks off.

Usually the World Cup period involves a certain level of selective social hibernation as I avoid fellow human beings, pour over the pre and post match build up, gossip and analysis, and only come out for the big matches. These are usually taken in at the pub, or at somebody's house with a crate of ale.

Hmm, it's not so simple this time. Pubs aren't the most welcoming place for kids full stop, and even if they were, the idea that a two year old will sit still for 90 minutes (realistically two and a half to three hours by the time you've blagged an early seat, stayed after to celebrate/commiserate... and don't even mention penalities!) is a fantasy.

So I've started wondering if there are child-friendly places to watch some of the games. I know that some pubs have areas you can hire, which might be suitable, and some cinemas are showing the matches on big screen, but are there are any events that fully cater for the harassed dad who wants to zone out for a few hours knowing that his offspring are being catered for?
Posted by Hackney_bloke at Wednesday, June 02, 2010 No comments:

We will fight them on the cakestands... 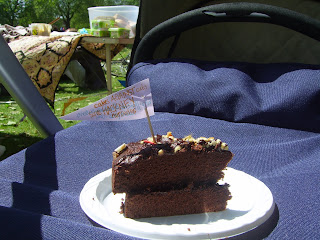 I recently received an email about proposed cuts to Hackney nurseries. The website explains what is going on a lot more coherently than I could. It also seems to be a very fluid situation, so watch this (or that space).

We went to the park to find out more about how local people are trying to fight the cuts. In some ways, it seems a similar story to the recent cause celebre of the Hackney Arts Club. This is a very popular club run by volunteers with a small grant from the the local Sure Start. However because of a change in priorities, its funding was cut and money reallocated elsewhere.

It's hard to argue if scarce funds are being used for people who are in greater need than yourself. In the new era of Sure Start, I'm probably not a key target (although as a male, primary carer I did seem to tick a few boxes and staff got quite excited when I turned up). However the problem in both of these cases is that it's difficult to know if funds are being reallocated or simply becoming 'efficiency savings'.

It's a case often made that services designed for the poor are poor services. It's kind of ironic that middle class users of Sure Start can be characterised as undeserving spongers by a government predominantly elected by the middle classes. Hey ho!

One of the great things about Hackney is that there is a real sense of 'something must be done' activism when stuff like this happens. It was great to see at the Fun Day in the park that facepainting and cakemaking have a role to play in the fight ahead. There's a meeting tomorrow to determine the next steps.
Posted by Hackney_bloke at Tuesday, June 01, 2010 No comments: