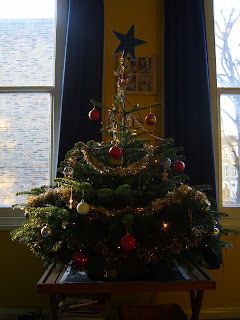 Christmas is almost upon us. We are on the road again this year, something that I learned to really appreciate last year when we were knackered first time parents. It is really comforting to be among family and loved ones at this time of the year, and crucially not to have to do any of the legwork. Well, that's not strictly true. I will wash the odd wine glass or 20 over the next week I'm sure. However the real hard working of hosting Christmas is the preparation. Deciding what you want to cook, buying all the ingredients, planning the day with military precision, ensuring you have entertainment planned, etc. We will just have to turn up, look thankful and tuck in. And I can't wait...
Posted by Hackney_bloke at Saturday, December 20, 2008 No comments: 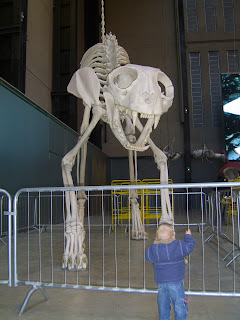 I exposed Jamie to some art this week. We met up with a friend of mine at Tate Modern for lunch. He was very well behaved and the staff in the cafe get a big thumbs up for child friendliness. They brought over a high chair, swept the buggy away to a less crowded part of the restaurant, brought him some crayons, and even heated up the soup I had brought for him. Well done the Tate!
As usual, Jamie was insatiable, so as well as wolfing down a whole banana, a clementine (or satsuma - at any rate, his fruit of choice at the moment), a yogurt, and his soup, he started begging for food from my plate. I feel bad about giving him chips, but at least they were fat chips, which are healthier, right?
After my friend had gone back to work, I thought it was probably a good idea that he worked off some of his dinner so I took him to the turbine hall, where the large exhibits are held. The last time he was here, he was still a babe and slept all the way through Shibboleth, as the massive crack in the floor was known. I took some fantastic video of him sleeping through this which I keep meaning to put to suitably atmospheric music - one of my pending projects alongside more pressing ones such as fixing the stair gate at the top of the stairs, and putting up shelves in the living room, and... oh, don't start me.
This time round he was a lot more lively and loved the space that the Tate affords and the glass walls that separate the turbine hall from the main body of the museum. The main installation was particularly interesting. The hall was screened off with opaque, coloured plastic strips which he loved pushing through into a hall filled with lots of yellow and blue bunk beds - a bit like an Ikea warehouse. His favourite exhibit however was a large scale (about 20 times actual size) skeleton of a cat. After he'd noted this he ran around like a small, demented robot, shouting "Cat! Cat!" which was particularly amusing as there was a group of arty types being given a lecture on its meaning. Well, it was obvious wasn't it, it was a massive cat!
Personally I thought his analysis was particularly insightful.
Posted by Hackney_bloke at Saturday, December 06, 2008 1 comment: