Is there anything more fun for a young boy at this time of year than kicking rustling piles of leaves? Well, yes, there probably are, and it depends on the youth of the boy where he gets his kicks, but it has to be in the top five. Especially when dad sanctions throwing armfuls of them in the air too.

Posted by Hackney_bloke at Wednesday, November 24, 2010 No comments:

It's been a tough week. HackneyBaby is not sleeping very well so we've been up at all hours through the night. To make matter worse, just as his big brother is discovering the joy of a lie in, he has taken over the 6am - or earlier - shift.

I've been feeling a bit low recently. I've only just managed to shake off a cough that has been lingering for weeks. It didn't really develop into a full blown cold or flu, but just left me feeling a bit crap. Combined with my sore foot and the lack of sleep, I haven't been the happiest of bunnies.

This week has been especially wearing as we've been trying to get HB to stay in his cot when he kicks off. Up until now we've been walking him about, taking him downstairs to stop him waking his brother. Anyway, we've decided to stop that because:
a) it doesn't really work, and
b) he's getting too heavy to cart around in the middle of the night, and possibly...
c) because his brother scared the bejeezus out of me the other night by appearing silently by my side in the darkened front room and loudly asking "What are you doing?"

So this week we've been trying to keep him in our room and his cot. On one hand this has been easier for me as my wife has been dealing with him when he wakes up. However the unspoken quid pro quo has been that I've been getting up with him in the morning. We used to take it in turns to do this, so by the end of this week I was shattered.

My wife is not an unfeeling woman and she offered to take the kids out today and let me have some down time. (They went to the St Joseph's hospice Christmas bazaar, where Barbara Windsor was there to open things up and was, by all accounts a real sweetheart.)

This left me free to do whatever my heart desired - go back to bed, go to the cinema, head for the pub... whatever I fancied. In the event I found it really hard to think of anything to do. I eventually went for a walk and found myself looking at all the weekend dads out with their kids on bikes, playing and having fun. Although I was only divorced from mine for a couple of hours I felt an irrational envy, almost a separation anxiety, as I wondered what my two lads were doing.

It's crazy. I see them every day and for a lot longer than many fathers do. As much as I sometimes think that they have completely taken over my life, it is obvious that they now are my life.

And yes, I realise how icky that sounds.
Posted by Hackney_bloke at Saturday, November 20, 2010 1 comment:

It's been a downpour today, but it was glorious yesterday. Even mucky old Hackney looks quite nice in the sunshine, especially when we're having such a glorious autumn for leaf colours.
Back in the day, before we had kids, we'd be heading out to Suffolk at about this time of year for an autumn break in the lovely seaside town of Southwold. Invariably we'd drive through beautiful golds, reds and yellows which would make me wonder why New England in the Fall is such a big deal when we have such wonderful scenes in our own country.
Plus, I doubt you can get real ale like Adnams in New England. Nor find a boozer like the Lord Nelson.
These pictures aren't great, but I just wanted to capture how lovely the leaves look at the minute in case there are no more sunny days before they all drop. 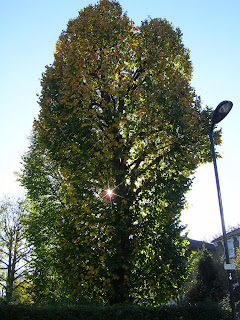 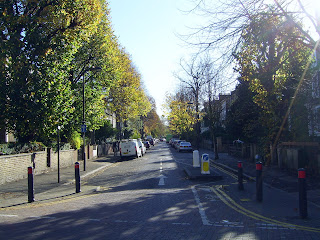 Not a great picture I know, but I had to climb on to somebody's wall and lean out to get this shot of the mysterious clay man. As he is looking away from me it is impossible to tell what look he has, or if he has any features at all. I'm thinking that he is perhaps Hackney's answer to Anthony Gormley's Event Horizon statues.
Posted by Hackney_bloke at Wednesday, November 10, 2010 No comments:

Following on from the under the radar success of the space potatoes and the wooden clacker things, the guerrilla artists of Hackney are at it again. Last night I noticed a small clay figure on top of the bus stop at the top of Graham Road. From my vantage point on the top deck of the 277, through the rain and condensation smeared windows, I could just about make him out. He seems to be sitting on an armchair as if watching an invisible TV.
It reminded me that I'd spotted another miniature figure on Kingsland Road a few weeks back. He also seemed to be made from unpainted clay, like his chair bound brother. However he was standing atop a wall with a life belt round his midriff. Poignant it was!
Unfortunately lifebelt man he has now gone as I tried to find him later to get a picture. But I wonder where the next clay man or woman might crop up and what they'll be doing.
Posted by Hackney_bloke at Tuesday, November 09, 2010 3 comments: