I have just spent the bank holiday Monday afternoon drinking in the pub. Post-kids, this is something of a rarity, but once upon a time it was almost the preferred option for wiling away the long bank holiday hours.
Today I wanted to see a local band that I'm quite partial to and having spent the past couple of days on family friendly activities (Southwold and Colchester's Big Sunday street festival), and given that the weather was rubbish, I had a green card to get down to the Kings Arms.
It did make me think back to the halcyon days of bank holiday weekends at South Bedfordshire's premiere pub venue, the Wheatsheaf in Leighton Buzzard.
This was my local in a way that I've never had since. It was the pub I started drinking in (underage, sorry Geoff), where all of my friends would end up at some point over the weekend, and where people really did know your name.
A special mention at this point for the main man behind the bar for much of this time, Roy who was one of the coolest guys we all knew. He was more likely to strike up a conversation about free form jazz, beat poets, indie rock or contemporary literature than how the football had gone this weekend. I think I've still got a copy of a Richard Brautigan volume he loaned me. 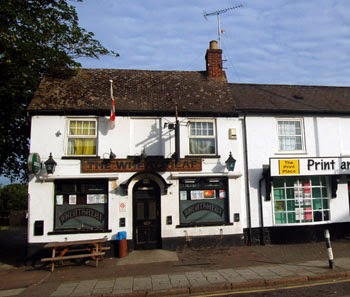 Anyway, the Wheatie was the centre of my universe for a number of years. I still remember fondly the pub trip to Glastonbury '90 in the back of one local's van - no planning, just turn up and get in. We were treated to an endless supply of home made vegetable wine from a regular named Les: "This is a rather pokey little beetroot noir. Goes very well with cheese." Roy was on that trip too - passing round the hash cakes probably.
The Wheatsheaf was, and is, a mainstay of the local gig scene in the region, so bank holidays were always a big deal - an opportunity to drink all day and groove down to local bands. I recall bombing back from the Stone Roses Spike Island gig in 1990, just to see a Northampton soul band called Moses who specialised in War covers (Low Rider and World is a Ghetto stick in the memory.) I must have cut a particular dash in my Levi's parallel flares and gig T-shirt.
I was still living at home at the time, having moved back there after university when no career presented itself on a plate - how very inconsiderate.
It was quite a depressing time in some ways. Three years at university had been one great big laugh - gigs, parties, laughs... but not much sex - and ending up living at home seemed a real let down.
Then I discovered a new, pub centred, group of mates. Many of them were just ordinary blokes and lasses. That's not meant to sound condescending. What I mean is that after three years in university surrounded mainly by privileged, middle class kids (this was the mid 80s before the great expansion of higher education), I was hanging with people who I probably felt more at home with. It was a community based around alcohol mainly, but a community nonetheless.
So, that was my bank holidays sorted.
Today was a bit different. I indulged in drink, but not so much in chat. The band were good but it lacked the shared experience of yore.
I felt a bit old to be honest, especially after one guy spoke to me about how it now took him two days to get over hangovers. "Still, I expect it's about four for you," he courteously pointed out.
It's a good job the next bank holiday is not for a few months.

A strange thing about the way we live so much of our lives online is how difficult it can make it to read situations.
I have friends who are so witty, scathing, political, angry or provocative in their online personas that I sometimes don't recognise the person I know.
We spend so much time now presenting our preferred image to the outside world. I remember when I first heard somebody talk about their personal 'brand' 20 years ago or so. At the time it seemed a ludicrous idea to me that individuals would think of themselves as a package of personal brand values, but not any more.
I think many of us do present an idealised image to the world online. One where we're funnier, smarter and more interesting than we really are. And it's easy to become trapped in a notion of how we are perceived by others through our Tweets, comments, status updates, Instagram pictures, check ins and likes. I often find myself hovering over a comment wondering, "Is that what I think?" or even, "Is that what people think that I think?"
And then deleting it!
At a time when the idea of 'authenticity' has gained great credence in branding, it's probably never been tougher to really be authentic. Or maybe that's just the case with frauds like me.
Today a friend replied to a Tweet of mine where I had recommended something she wrote. She thanked me, but I'm so used to reading her acerbically funny comments about stuff that I couldn't work out whether it was a genuine or not.

Why did she use those particular words?
What does the use of capital letters THERE mean?
Do you even thank people for praise in Tweets?

I know, First World Problems.
Maybe I should have called her.

Who wants an ice cream?
It's vanilla - I've got it right here.
It's free. You don't need to pay.
The man took it out of his freezer.
He just left it at the side of the road.
There's nothing wrong with it.
But there isn't any space.
There's strawberry as well.
Look at the swirl of red.
They're filling up the freezer now.
No room for ice cream.
Does nobody want one?
Posted by Hackney_bloke at Thursday, August 07, 2014 No comments: