How musical bumps saved me from the recession 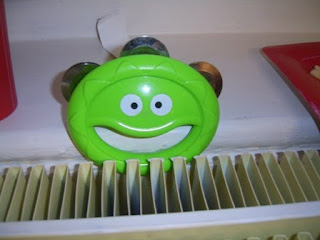 I've been slightly distracted over the past 18 months, what with bringing up baby and being a semi-stay at home dad. In an earlier post, I'd predicted that it was maybe a good time to ease back on work commitments, as there wasn't much of it about anyway. Hmmm, that one's come back to bite me on the bum.

The thing I've found about trying to combine childcare and work is that you have to be careful that you don't end up shortchanging both. There have been times when I was crying out for somebody to take J off my hands for a little while (and I was lucky enough to have a friend who did just that on a few occasions - thanks Alecia. Unfortunately she's gone back to Australia).

You can end up rushing work, or not giving it the mythical 110 per cent. Sometimes that doesn't matter - good enough can be good enough. At other times, I wonder if I've put myself back in the pecking order, or completely dropped off people's radar. It's not a good time for that to happen.

Splitting your loyalties means that you sometimes end up resenting your child because you can't devote extra time to a project, but it has also been a great release valve. As work slowed down, I found that the days when I was full time dadding were very calming. I came to realise (and was told in no uncertain terms by my wife) that that was my priority. There's no point sitting around feeling sorry for yourself when you have a toddler to entertain. It's a lot easier for everyone if you just leave your work baggage at the door of musical bumps, or whatever class, playgroup or kiddie event you are attending and just get on with it.

It seems counter intuitive, but I'm sure that I would have been a lot more stressed if I didn't have a child as I watched work drain away during the recession. I've always felt that I was doing something worthwhile, even if the pay was lousy.

Now, however I'm back to being available five days a week, and my wife is on maternity leave with pay that will not last forever. I really have to pick up the slack. Luckily, I feel slightly tempered to the new reality of work. There's really no point getting uptight, especially with another one on the way. That will be stress enough.
Posted by Hackney_bloke at Tuesday, March 02, 2010