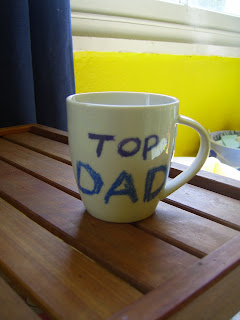 ... father of boys that is. At least I think that's how I should now refer to myself as Mrs Holiday informs me that she is mother of boys or MOB in Mumsnet speak. (As an aside, who delegated Mumsnet to the role of spokessite for all parents? Lazy journos I'm guessing).

Our latest Hackney addition was born on Easter Sunday in Homerton Hospital's new birthing centre. This is a shiny, sparkly set up with lots of space and every conceivable (pardon the pun) mod con. Well, maybe that's stretching it a bit, but we were afforded a large room with a double bed, bouncy ball, ensuite bathroom and a strange labour chair/multigym. The midwife was really good, even though my heart sank slightly when she introduced herself as an agency worker. However Penny was encouraging, informative and just plain nice, even if she was a little scatterbrained.

Which may account for the loss of our labour notes. This was a big negative, firstly because of the obvious shabbiness of the processes that allowed it to happen - how the flip can you lose something like that? But also because it delayed us getting out and home, which is all anybody wants, especially a second time mum with another child plaintively asking for her to come home when he visits.

Anyway, it seems a long time ago now, even though it's less than three weeks. The time since then has been ups and downs. New Hackneybaby is sleeping better than his brother did, but has developed colic, which is never fun. Having an older brother adds a new layer of complexity to things as well. You don't want to neglect the older sibling, although he suddenly seems so much older and more able in comparison. Big brother is being pretty good so far, expressing his love for the baby constantly, although I suspect it is more to do with the fact that he's cottoned on to what we want to hear than any abiding sibling love.

Having said that, I think they will be great together. I'm conscious of not wishing the time away, but it will be great when us boys can do a bit more together. For now, inbetween the screams and projectile liquids (don't ask), it's nice, and the pace of everything has slowed right down. And as the spring beds in and we get a few nicer days, I think it's going to be a great summer.
Posted by Hackney_bloke at Friday, April 23, 2010