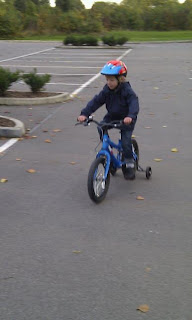 With number one son getting ready to start school, I decided that I didn't want to drive him there every day. His school is around 1.5 miles away, which is a little too far for his little legs, even with his Micro scooter, on which he is a whizz.

Having researched a few options, I decide that the best was a bike trailer. His younger brother will start nursery soon, so we bought one that can accommodate them both. We actually bought this before we had bought the bikes needed to tow it. These eventually came from a great little charity in Colchester called Re-Cycle.

It collects old bikes and does them up before sending them off to Third World counties. They also recondition bikes that you can buy here, to cover their costs. Not only is it a great charity, but you can also pick up some fantastic bargains. The bikes go through a 20-30 point check and can be practically like new.

We picked up two bikes - a Raleigh mountain bike/hybrid type for me, and a sit up and beg style ladies bike for my wife. Together they cost less than the trailer itself. Both seem to have new or almost new tyres, came with a three month guarantee, and that all important accessory, a bell.

Although I have cycled off and on since I was a kid, this is actually the first bike I have owned since I was about 17.`1

The school run has turned out to be a great little trip to kick start the day. The school road gets fairly congested with traffic and you often have to park a few streets away, but with my vehicle I can navigate right to the school gates, or even inside.

I was a bit nervous about towing the trailer in traffic. A friend told me that they knew somebody who had given it up after having an unspecified accident. The roads to school are fairly major town roads with a few slightly hairy junctions and other obstacles to negotiate - narrowing of the road, traffic lights, crossings and so on. I took the bike out a few times before term started to get used to it, but there was no way to really prepare for the big day and rush hour traffic.

As it happens, I've been pleasantly surprised by the respect I'm given by drivers. I thought that my contraption would be viewed as a huge annoyance by psycho drivers, anxious to get by me. It's early days yet, but I haven't had any of that, and no road rage of any sort yet - thank you patient drivers of Colchester.

It's not stopping with me though. It was J's fifth birthday yesterday and his main gift from us was a bike. I can still remember the first bike I received, and it's heartening to report that he was as excited about his bicycle as I was with mine. Now we just need to get those stabilisers off and we can let the good times roll.
Posted by Hackney_bloke at Tuesday, October 16, 2012